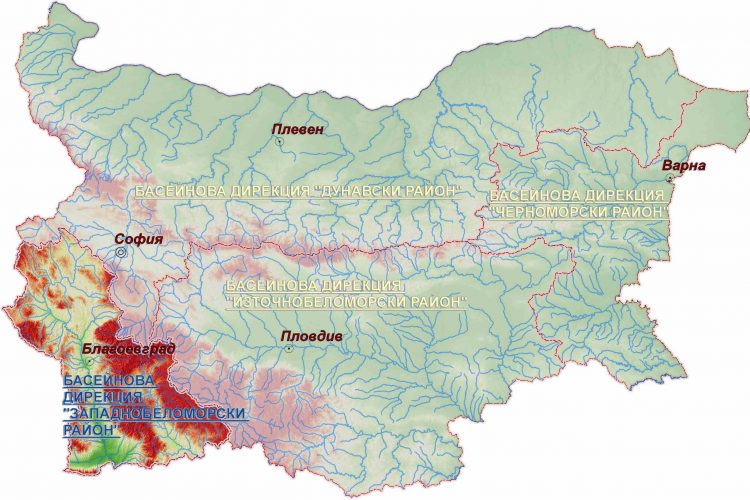 The management of the waters in the Republic of Bulgaria takes place at the national and basin level. Pool basins and basin councils are created for basin management. The Basin Directorate is headed and represented by a Director. The activity, the organization of work and the composition of the Basin Directorate shall be determined by Regulations. In 2002, under Art. 153 of the Water Act and in accordance with Article 3 (1) of Directive 2000/60 / EC, four directorates for river basin management have been established at the Ministry of Environment and Waters:

Black Sea Region with the center of Varna – covering the area east of the underground waterbed of the Malmvangan aquifer and the catchment areas of the rivers flowing into the Black Sea from the north to the southern border, including the internal sea waters and the territorial sea. The Black Sea Basin Directorate includes the territory of 46 municipalities from 8 administrative districts with a population of 1 149 million inhabitants;

East Aegean Region (IBB) with a center in Plovdiv – for the catchment areas of the rivers Tundzha, Maritsa, Arda, Byala Reka;

West Aegean region (BDB) with Blagoevgrad center – for the catchment areas of the Mesta, Struma and Dospat rivers.

The principle of basin management is based on the natural disposition of the watersheds between the water catchment areas of one or several main rivers in the territory of the Republic of Bulgaria.